Keeping up my bi-yearly blogging cadence, I thought it might be fun to write about what I’ve been doing since I left Mozilla. It’s also a convenient time, as it coincides with our work being open-sourced and made public (and of course, developed in public, because otherwise what’s the point, right?) Somewhat ironically, I’ve been working on another machine-learning project, though I’m loathe to call it that, as it uses no neural networks so far, and most people I’ve encountered consider those to be synonymous. I did also go on a month’s holiday to the home of bluegrass music, but that’s a story for another post. I’m getting ahead of myself here.

Some time in March I met up with some old colleagues/friends and of course we all got to chatting about what we’re working on at the moment. As it happened, Rob had just started working at a company run by a friend of our shared former boss, Matthew Allum. What he was working on sounded like it would be a lot of fun, and I had to admit that I was a little jealous of the opportunity… But it so happened that they were looking to hire, and I was starting to get itchy feet, so I got to talk to Kwame Ferreira and one thing lead to another.

I started working for Impossible Labs in July, on an R&D project called ‘glimpse’. The remit for this work hasn’t always been entirely clear, but the pitch was that we’d be working on augmented reality technology to aid social interaction. There was also this video:

How could I resist?

What this has meant in real terms is that we’ve been researching and implementing a skeletal tracking system (think motion capture without any special markers/suits/equipment). We’ve studied Microsoft’s freely-available research on the skeletal tracking system for the Kinect, and filling in some of the gaps, implemented something that is probably very similar. We’ve not had much time yet, but it does work and you can download it and try it out now if you’re an adventurous Linux user. You’ll have to wait a bit longer if you’re less adventurous or you want to see it running on a phone. 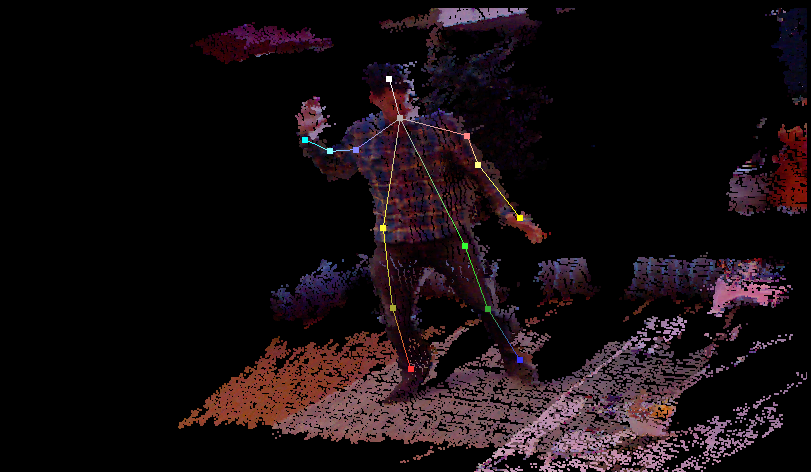 I’ve worked mainly on implementing the tools and code to train and use the model we use to interpret body images and infer joint positions. My prior experience on the DeepSpeech team at Mozilla was invaluable to this. It gave me the prerequisite knowledge and vocabulary to be able to understand the various papers around the topic, and to realistically implement them. Funnily, I initially tried using TensorFlow for training, with the mind that it’d help us to easily train on GPUs. It turns out re-implementing it in native C was literally 1000x faster and allowed us to realistically complete training on a single (powerful) machine, in just a couple of days.

My take-away for this is that TensorFlow isn’t necessarily the tool for all machine-learning tasks, and also to make sure you analyse the graphs that it produces thoroughly and make sure you don’t have any obvious bottlenecks. A lot of TensorFlow nodes do not have GPU implementations, for example, and it’s very easy to absolutely kill performance by requiring frequent data transfers to happen between CPU and GPU. It’s also worth noting that a large graph has a huge amount of overhead that will be unrelated to the actual operations you’re trying to run. I’m no TensorFlow expert, but it’s definitely a particular tool for a particular job and it’s worth being careful. Experts can feel free to look at our repository history and tell me all the stupid mistakes I was making before we rewrote it 🙂

So what’s it like working at Impossible on a day-to-day basis? I think a picture says a thousand words, so here’s a picture of our studio:

Though I’ve taken this from the Impossible website, this is seriously what it looks like. There is actually a piano there, and it’s in tune and everything. There are guitars. We have a cat. There’s a tree. A kitchen. The roof is glass. As amazing as Mozilla (and many of the larger tech companies) offices are, this is really something else. I can’t overstate how refreshing an environment this is to be in, and how that impacts both your state of mind and your work. Corporations take note, I’ll take sunlight and life over snacks and a ball-pit any day of the week.

I miss my 3-day work-week sometimes. I do have less time for music than I had, and it’s a little harder to fit everything in. But what I’ve gained in exchange is a passion for my work again. This is code I’m pretty proud of, and that I think is interesting. I’m excited to see where it goes, and to get it into people’s hands. I’m hoping that other people will see what I see in it, if not now, sometime in the near future. Wish us luck!